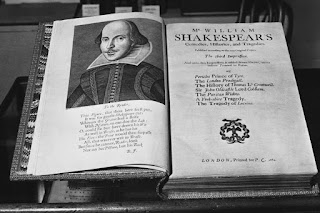 I’d like to nominate William Shakespeare as an honorary Southerner. He is already unquestionably one of the most quoted, prolific poets and playwrights of all time. Unfortunately, many people think him inaccessible; however, I differ. In fact, his universality is at the very core of his popularity. He grasps the myriad personalities that create social strata across cultural divides. His abilities to create real characters and expose internal conflict is particularly exciting, and if his dialect were delivered with a Southern drawl, the world would say that he belongs to the South!

Will has created words and phrases that have gone mainstream in the Southern dialect. He gave us, “Neither here nor there" for us to dismiss extraneous comments. He gave us “Salad days” to help us remember our youthful, more inexperienced times. He gave us “Send him packing” to colorfully show how we get rid of carpetbaggers and other useless people.

Will told us that “Mum’s the word” so that we can pretend we don’t gossip about our neighbors, and he taught us how to live “With bated breath” when we anxiously wait for Northerner neighbors to understand our Southern way of life, which may never come.

Personally, I have been on a “Wild goose chase,” trying to find a decent man to date, and I’ve been “Eaten out of house and home” by hungry party guests. I’ve been “Up in arms” over people who do not know how to appreciate my Southern hospitality, and I’ve have seen “The devil incarnate” in the form of fake friends. I’ve been told that someone has “A heart of gold” at my church, and I’ve been told that “All that glitters is not gold” by my mother.  I’ve also been told that many times something that I would like to affect a change has already been declared a “Forgone conclusion.”

I could go on and on, but you’d eventually tell me “Good riddance,” so I’ll move on so I don’t get myself in “A pickle.”

William’s plays and poems hit at the very heart of the human condition, and that fact is the very detail that makes Will so Southern. Romeo and Juliet features families that feud over social status (such a Southern theme). Julius Ceasar shows how even the common man cannot handle power, and how war is always at hand. Hamlet teaches us how crazy and underhanded even honorable families can become. Macbeth is the epitome of envy and social climbing. Hello, these themes (and more) are at the core of Southern society.

Southerners have adopted so much of what William Shakespeare wrote in the 1600’s, even though all may not even understand from where it came. Though you may say “It’s Greek to me,” I will continue to advance the theory that Shakespeare is essentially Southern all the “livelong day.”

*All phrases in quotations are from the bard!

Posted by Vicki Wilkerson at 3:28 PM