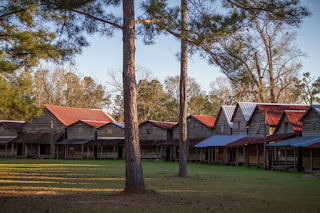 One of the unifying images and settings in Swamps and Soirees is the idea of Camp Meeting. Camp Meetings were historical gatherings that began in the late 1700’s during the Great Awakening. Francis Asbury, one of the founders of Methodism, travelled and preached at these ad hoc campgrounds as residents in the area gathered for a week-long revival of Christianity.


Through the years, the camp meetings morphed into something more than their strictly religious beginnings. At the inception, tents were erected for local residents to sleep in and rest between the meetings. Later, crude wooden structures were built to replace the fabric tents. These wooden structures were built with only a couple of feet between them, had dirt floors, an open floor plan and a loft for sleeping. Porches extended from the fronts with primitive benches under them, which encouraged folk to sit outside to socialize with their neighbors. Some families have owned these cabins for generations, passing them down to successive generations.


Initially, these “revivals” could occur at most any time of year; however, as they became annual gatherings, the meetings were organized around the harvest in the fall when campers could enjoy the fruits (and vegetables and meats) of their labors. There was always a pig or two sacrificed for the occasion. Many families even hired cooks that had worked the camp meetings for practically their whole lives. Camp meetings are still known for their amazing Southern foods.


At the center of the circle of “tents” an open-sided wooden Tabernacle with simple benches became the central gathering place in the evenings for services. This Tabernacle was physically and symbolically the centralized reason for fellowship and a revival (or rebirth or an awakening) of faith for the entire community.


A fictitious camp meeting is a unifying motif in Swamps and Soirees. Throughout most of the novel, the characters look forward to the meeting, plan for the camp, and enjoy friends and family during the revival. It is also where some very important “events” happen that change the outcome of this inspirational story. I hope you enjoy learning about camp meeting as you read this funny, inspirational story of hope, love and courage!
Posted by Vicki Wilkerson at 2:52 PM 2 comments: